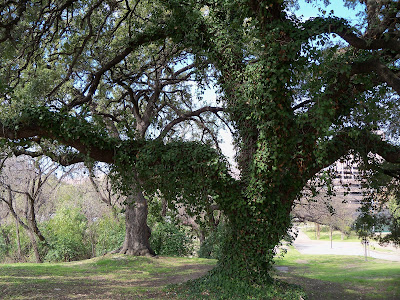 The Mass readings and Fr. Larry's homily put me in a pensive mood today.  The gospel was about Jesus' telling the disciples that they were his friends.

No longer slaves.  Big promotion.  Friends.  And the job description that does with it:  “This is my commandment, love one another as I love you.  No one has greater love than this, to lay down one's life for one's friends.”

Which, needless to point out, Jesus did.

Fr. Larry sang, “What a friend we have in Jesus,” and then asked how it works out if we try to reverse the lyrics.

Well, pardon me while I crawl away to hide under the nearest rock.

Later today, I got to thinking about the movie The Tree of Life.  I keep hearing it referred to by critics as a “near masterpiece,” and always I think: Near?!

To be sure, when I saw it a third of the audience left the theater, baffled and impatient, 15 minutes into the picture.  But I hung in there and was richly rewarded.

The movie is about the interplay between Grace, personified by the mother, and Nature, personified by the father.  It opens with words from Job: “Where were you when I laid the foundations of the earth?”  We then witness a family facing heartbreak and loss, the creation of the universe, and the evolution of life on earth.

The Disney movies of my childhood were a bit misleading.  We saw a lot of lions pursuing zebras, but not the gory outcome.  When things became a bit more realistic and we did, we were offended by the lion's rapacity.  It seemed natural then to root for the prey, for what we perceived as the victim.  Only much later did it occur to us that the lions' babes were no less needful.

In The Tree of Life, the father over the years becomes sterner, unyielding, especially with the oldest son.  The boys grow up, move out.  One dies in Vietnam.  It's easy to root for the mother's merciful and tender ways with her boys against the hardness and inflexibility of the father's.

Hard, too, to remember that Nature's laws, though they have no pity, are precisely what we asked for, and what we  became subject to upon exile from the Garden.  We would get to be both predator and prey.

We witness vignettes from the family's life as everyone endures the loss of innocence, until Grace breaks through from another dimension and restores each to him or herself, reconciling all to itself, and to each other.

Which is, of course, what Jesus did, and does.

“Oh happy fault, which bought for us so great a Savior.”

It was the only way we were ever to be rescued from Nature, which is to say, ourselves.  In our short stay in the Garden we longed for that big promotion.  We listened to the flatterer as he insinuated that we could know what the Big Guy knew, and that meant we'd be His equal.

We could all be good buddies!

And so the Big Guy let us go to seek our own way, and we learned what Nature always knew, that there is the hunter, and there is the prey, and we must sometimes be one and at other times be the other, but always, we must live within the boundaries of Nature's laws.

Jesus says in the scripture, “I have called you friends, because I have told you everything I have heard from my Father.”  God laid all His cards on the table this time around. No secrets, no forbidden fruit.

Only the terrifying equality of friendship.