This is the next-to-the-last week, which, as I recall from my days running camp, is the tiredest, hardest week of all for the camp staff.

Next week their hearts will be bittersweet sad/happy, remembering the campers they’ve served over the summer, not knowing if they’ll see them ever again, hoping they will or—in some cases—they won’t!  They'll know an important time is coming to a close, and they'll feel energized to make sure it counts.

Here’s a wrap-up on camp last year by Trevor Melvin, our lifeguard. This young man not only serves as lifeguard for the summers, he also comes out with his fraternity for a week at spring break to work on Ranch construction projects as part of P.U.S.H. America. 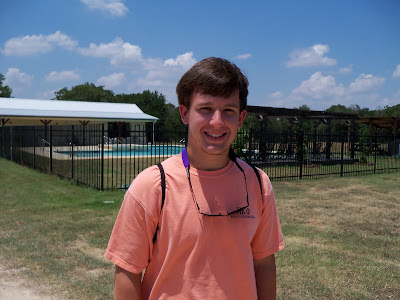 The most important thing I want to do is thank you for such a tremendous privilege. Serving your campers was an indescribable joy, and I count my decision to work here among the best I’ve ever made. My experiences over the last eight weeks of camp include many memories I will not soon forget.

The summer began with quite a bang. Andy and his friend Steve were perhaps two of my favorite campers. I don’t mind being insulted when the names are as original as “chicken-nugget” face.

During the second week I finally got a hug from Glenn. That was special.

Throughout the first teen week I was shot, chopped in half, taken prisoner, and thrown in the dungeon. The boys’ lodge was a veritable war zone. Force fields worked to some extent, but invariably Danny, Daniel, and Ethan would decide whatever invisible weapon they had was more powerful.

After our break Michael came to camp, and for two weeks I spent an extra five to ten minutes getting him out of the pool. It began as a frustration, but soon got to be pretty funny

I remember arguing furiously with David L. that he could only have one wife—he can’t have both Carrie and Monique.

David F. and Cody were two of my favorite campers. I always got a smile and a hug from David, and he loved coming to the pool. Cody was unpredictable, but that guy loves to talk. He is hilarious! I would hang out with him any day outside camp.

Tjakea asked for more work but I was sorry to have to tell him I had already cleaned the pool. He was extremely good at remembering the rules, but eventually I would have to stop him from explaining them to give the campers any time at all to swim.

This week I watched Space Jam like it was a live NBA final. If the Looney Tunes had a real team they would have the best fan base in the history of sports. I haven’t cheered for anyone half as hard since watching Tiger Woods win the Masters back in ’05.

These are just a few favorite memories, but this summer was filled with other things, too: hundreds of Popsicle wrappers picked up, thousands of grasshoppers in the skimmers, countless basketball retrievals, and numerous rejections on the dance floor (although these paled in comparison to the number of “yeses).

The most important number, however, was zero, which was the number of times I had to jump in the water to save anybody. Johnny’s tumble out of bed at 2:00AM was the worst I had to handle, besides yelling at people to stop wrestling in the pool.

I could go on and on for pages about how amazing this experience was, but only I think because none of the words would be adequate—what happens at Ranch Camp is indescribable. The best I can do is say that it is miraculous.

When I first got here for P.U.S.H. someone said, “This is God’s country.” What he meant was we’re in the middle of nowhere, but I see now that he was right.

The Ranch is God’s country, because God’s work happens here every day.