Got the call about 11:00 that our chicks had arrived at the Elgin post office and they were–ahem–ready to have them picked up. 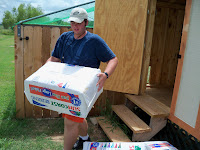 I snagged Matt out of Ranch Camp with Denise's blessing.  Matt's our main Chicken Wrangler and has helped engineer this segment of Operation Independence.

Right now our little friends have a lot of growing to do, but we look forward to the day they will provide major assistance with grasshopper control and give us yummy eggs each morning.

I have frittered away a good part of the day hanging out with the wee ones.  We have 40 chicks, several each of nine different breeds.  They are so incredibly dear and small and busy, runnning from wall to wall inside the Chicken Hilton.

They're about two days old, and I don't think they'd eaten until they arrived, but the moment we let them out of the box a gigantic grasshopper leaped through the wire and they were after him immediately.  I guess they got him eventually because when I came back to check on them later there was no sign of the grasshopper.

Already when I come into the enclosure and call “chick chickee chick chick”  they come running.  When I sit down on the pine bedding they gather around me.  They'll go exploring busily around and then just stop, wobble this way and that for a few seconds and then plop down and close their eyes.  This was a little alarming at first but then I realized they're just taking a quick nap.

When the Ranchers got off work at 3:00 they started coming by to see the new additions.  Alaina said she wanted to name all the boys Tim and all the girls Faith, which was fine I told her except for Clara and Ray.
Tomorrow the Garden Team will begin caring for them.

As you may can tell, I'm nuts about chickens and for me this is a very happy day.  Stay tuned to watch our flock grow and thrive!