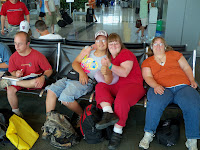 Thanks to grants from the Lower Colorado River Authority, parents, and a First Baptist Church of Woodworth, Woodworth, LA, we were able to travel to Walt Disney World for the National Down Syndrome Congress annual meeting and convention, taking 11 residents with Down syndrome to attend the simultaneous Youth and Adults with DS Convention.

I had planned to blog throughout our adventure, which began last Thursday and will be ending with the return of the residents and staff to their homes in about two hours from now after their plane lands in Austin.  However, it turns out that while Disney World may be many wonderful things, it is a crummy place for a convention, especially for–as in our case–people traveling in a large group, or–as in many other cases–young families with small children, strollers, and baby paraphenalia. 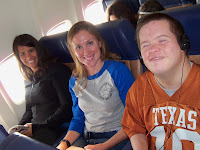 We arrived late Thursday evening in the Orlando airport and hit the lobby of our resort hotel, Aruba, about nine.  We had to check in room by room, a process which took about an hour.  The Ranchers were amazingly patient as they entertained themselves and one another as Casey, Phil, Marci, and I figured out all the details. 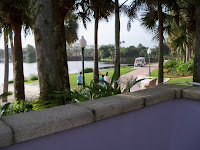 Finally we had all our key cards and, each clutching a map which made absolutely no sense to us in the dark, boarded a shuttle bus that would take us to our rooms…sort of.

Thirty minutes later we were deposited beside a shuttlebus shelter next to a parking lot next to clusters of two story lodgings, each dragging a heavy suitcase and armloads of other perceived necessities.  The Donner party flashed through my mind as we began trekking through the jungle in the dark, in a direction picked at random, there being no signs, nor signs of life, to guide us toward our proper destinations. 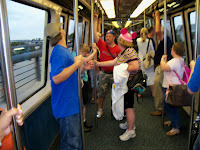 We were to reside in Aruba (where people tend to disppear, as I recall, but I tried not to think about that.)  By now the Ranchers were, quite understandably, becoming vocal about having consumed nothing but a small drink and a Clif bar since lunch at 11:30 that morning.

We wended our way around this building and that, finding numbers affixed to them occasionally.  After another half hour we'd all found our buildings and our rooms and agreed to meet at the foot court across the lake, the lights of which were twinkling merrily over the water. 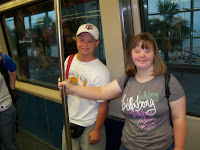 At 10 after 10 we reached the promised land and snagged some burgers and fries before the concessions closed.  The tab was only about 40% more than it would have been at a prime rib steakhouse, but we were in no position to haggle, or to go anywhere else.

In the morning we met at the pool and laughed at our pickle the night before, because once you could see the layout we saw we'd walked a good five times further than we'd needed to.  We met a young family in the pool with baby Landon, here for his first NDSC conference.

Once we'd all connected, we found our bus stop again and headed for Hollywood Studios Park.  We waited about a half hour for the bus to take us there, which it eventually did. 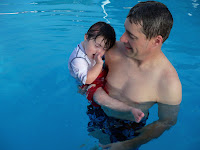 The park was pretty, but had nothing on Sea World or Fiesta in San Antonio.  We were there principally for the High School Musical review, unlike ten or eleven other patrons of the approximately one million in the park. 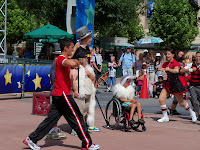 We got a good seat on the concrete and settled in.  We were a little concerned, because Kara had staked her entire experience on being able to dance with the cast, something over which we had little or no control.  But Kara did, and she made sure they noticed her enthusiasm and knowledge of all the songs and dance routines.  Before we knew it there she was, stepping out with one of the handsome cast members.  Later Mike and Kristen got a chance to join the troupe too.

We went to lunch at Mama Melrose's Italian Retaurant and I looked forward to mediocre food at eye-popping prices, but I was wrong wrong wrong!  Well, right about the prices actually, but a simple bowl of vegetarian minestrone and a salad were as good as anything I've ever tasted, and that's a fact!

By then I'd had all the fun I could stand, and left the park to go to the conference, where Jerry and I joined a workshop of older parents whose adult kids with Downs had married or were contemplating marriage.  More of that later on in the week. 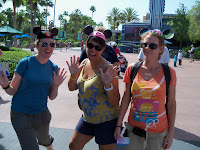 They got registered for their conference, and Jerry and I went to dinner, which again was pricey but quite out of the ordinary.