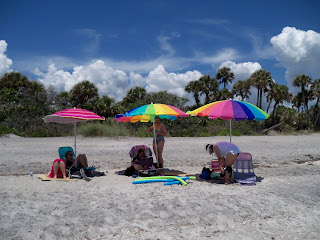 Yesterday we had another beautiful day at the beach.

This time we brought umbrellas, mats, and folding chairs.  Kelly swam in a heavy T shirt to protect her from the relentless sun.  Despite frequent slatherings of high SPF sun screen, our skin tones are varying from lobster red to deepening tan.  By vacation's end we will–intentionally or not–all provide ample evidence of a week's vacation in Florida.

“I don't want to leave this vacation!” Kelly said at one point.

Then last night we decided to go to a movie.  Get Him to the Greek.  Ugh!

All we'd read was that it was funny.  There were a few funny bits, but the raunch far outweighed the merits (I'm being generous here using the plural, because the sole merit we agreed on was that we liked Russell Brand quite a lot.)

For reasons unknown we individually and collectively hung in til the end, despite the huge cringe-factor. Afterwards we all agreed that we would have been happy to walk out had one of us headed for the exit.  We still don't know why we didn't.

How to describe?  Juvenile–what's funny about vomit and feces?  Not much.  The “F” word?  Never was funny and the shock value wore out about 1969.  The focus on sex…please!  If it were that disgusting, meaningless, and degrading the species would have died out millenia ago.

This thing got great reviews from people I expect better of.  Big question of the evening: what does it take to earn an “X” rating these days?  If this didn't warrant it, what does?  Oh well, de gustibus non est disputatum. Tomorrow we're going to see Toy Story 3 to get the nasty taste out of our minds.

(All the above is to warn folks what they're in for should they go to that movie.  You may thank me now or later.)

Today we drove down to Sanibel Island, which is built up from the deposits of eons of currents dumping shells.  The sand is like talcum powder, the beach made up of shells. 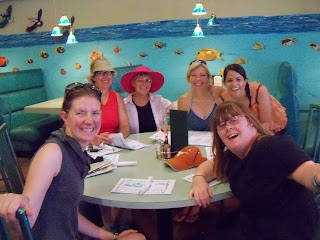 After lunch at The Hungry Heron, we did a little souvenir shopping and headed for the beach.

Standing in the water, you can find all kinds of living mollusks by just wiggling your toes down into the sand.

We were enchanted when the pelicans began cruising in close to us and diving for fish.  Carolyn, Caitlin and I went further out into the water to check them out.  Caitlin said off handedly, “We wish things were more dolphiny!  We want dolphins to come and play with us!”

“Yeah, I'm sure if you saw a fin cutting through the water you'd hang around to see what it was,” I said.

Not a minute later, a large, grey body arced through a nearby breaking wave.  We were in about 3′ of water.  Our eyes bugged, we grabbed one another, and headed for shore as fast as we could go, which wasn't very.  (Caitie moved a bit quicker than Carolyn and I, however, because as she later reported, she'd felt a distinct bump shortly before our sighting.)

Once closer in we warned a family with young children and all retreated toward the water's edge.  We saw the critter breach a few times more.

We figured that, shark or dolphin, it had been attracted by the fish and the feeding pelicans and hugged the shore from that point on.  Whatever, it was an exciting finale to our day on Sanibel.

Once back at the house, we googled Sanibel beach and sharks and learned that indeed sharks abound off the popular beaches and that one should never 1) go into the water after 5:00 PM or before 9:00 AM 2) hang out near feeding pelicans.  Also, given the fact that we'd only seen one, it most surely was a shark and not a dolphin, who prefer to swim and hunt in groups.

The guide books cheerfully note that our chances of mayhem while driving in Florida traffic are billions of times greater than can be expected cavorting amidst the local marine life, but our story's just going to get better by the telling… 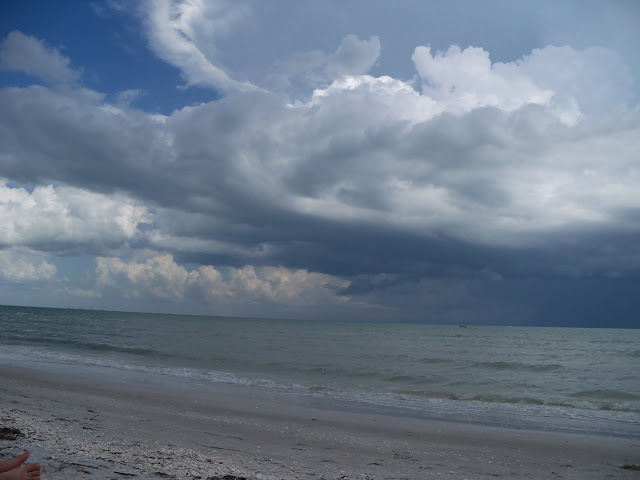 Other advice warned us against staying on the beach with nearby thunderheads, which we also foolishly did until I pointed out to Carolyn that they looked very like the clouds that excite the storm-chasers we watch on TV.  To appease me, we took down our umbrellas and headed for home.

Once showered and changed, we headed for the local Pig and Whistle English Pub for dinner and a pint.  Kelly didn't crank once about eating dinner at 9 in the evening, a true mark of her growing sophistication.  Turns out that the area we're staying in is a favorite for British nationals, and the pub does a brisk business despite having gotten its start in the pit of the recession.

On the way to the pub we stopped neighborhood traffic to gawk in true tourist fashion at ‘gators lounging in the nearby waterway.

After way too much food we left the pub and Kelly said, “One more day of freedom!”

We made it back to the house with no further wildlife encounters.  The night was beautiful, half the sky pulsing with lightning, and the other  clear and starlit. One last phone call to Sterling, and Kelly was ready for bed.

Today the girls headed for the beach and I stayed behind.  I was sure Kelly would stay behind with me and spend the day watching DVDs and having precious alone time, but this girl is in for everything that's happening.  I am impressed!

But I am happy tucked away in our lovely vacation home, letting my sunburn heal (didn't know that with a long-sleeved, buttoned-up shirt you can still turn into a crispy critter).

Tomorrow, back to real life.

“One more day of freedom,” as Kelly says.