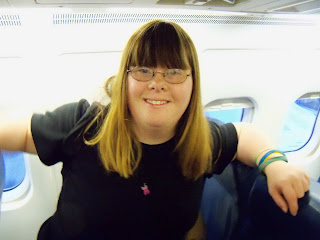 Packing to leave for Florida with Kelly to celebrate oldest sister Carolyn's 50th, I wondered what to do about the blog while I was gone.

Halfway through the packing I knew–write about traveling with a young adult with Down syndrome on a trip that was sure to present ample challenges to her love of routine and likely to wander far outside her comfort zone on a regular basis!

Most of Kelly's forays out into the world are on behalf of and cater to Kelly and or Kelly and her buddies.  But this one's first and foremost about stepping up to the plate as an equal member of a group of four dynamic sisters, plus Mom and niece Caitlin.

Dad talked Kelly up beforehand to emphasize that she was traveling on her own ticket, spending money she had worked hard to earn, and that she would be expected to cover her own expenses.  He even suggested she plan to take the group out to lunch while in Florida.

Saturday morning Kelly, sister Janis, Martha and I drove to San Antonio and to catch a flight to Ft. Myers, FL, where we would meet Caitlin and Carolyn, coming in from Kansas. 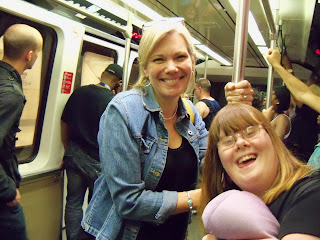 Kelly sat with the sisters and as we debarked in Atlanta was expressing confusion about the fact that the clocks showed the time to be an hour later than her watch said.  I tried to explain about time zones, but soon learned the real problem was Kelly's watch, which she wanted me to change, which I could not do and would not attempt.  Fortunately Martha was not about to attempt to change hers either and both sisters agreed to just add an hour onto the time for the next few days.

En route to Ft. Myers Kelly and I sat together.  The jet was very loud and fast during takeoff, and she huddled down beside me and held on tight.  We talked about how she'd never liked this part of flying.  “I don't like it,” she said, and I tried to comfort her.

Unfortunately, the ride was bumpy all the way, and she was unable to concentrate on her DVD movie, but she put on her brave face and made it.

We got off the plane at 8:30, grabbed our bags and began looking for the rental car agency.  By now Kelly was tired, and losing patience fast.

“Where is it?!” she demanded as we trudged down the sidewalks toward an unknown destination in the dark.  “I don't like this!”

“We don't know where it is,” I said, “but the signs point this way so we'll just keep walking.”

Kelly still cannot grasp that there are things I do not know, and cannot control.  She became cranky and petulant.  “But I don't LIKE it,” she said plaintively. 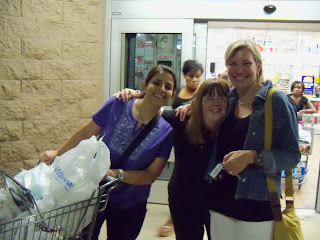 Soon we found the bus stop where a shuttle would take us to the agency.  We got there and had to wait while Martha negotiated the rental.

Once in the car, Kelly was delighted.  “I like this car!” she said.  “I want one like it for my wedding, and Bryan (Carolyn's husband) can drive Sterling and me away.”

I laughed and asked what other plans she had for her wedding and she said, “The Aggie band will play for the reception.”  I was delighted by the image of ranks of uniformed Aggies blowing trumpets and beating giant drums for a Catholic wedding reception, but simply noted that the Aggie Band might not be up for it and I was sure we could find something suitable that she'd like.

As luck would have it, our adventure was just getting started.

We pulled out of the airport about 9:30.  Carolyn and Caitlin were already ensconced in the house and reported that everything was flat, dark, and seemingly uninhabited, and the road signs were not easy to find.

We decided to stop in a Wal-Mart to buy provisions for the next morning's breakfast, and Kelly objected loudly.  “We don't go to Wal-Mart at night,” she fumed.

Patience was wearing thin.  “Tonight we do,” I said.

We put some wine in the basket and Kelly asked, “Can I drink wine?”

Back in the car we reviewed all the Ranchers at the Ranch and she was not agreed that all could drink wine, even though they were over 21.

Driving down the dark corridors of palm trees, she suddenly said, “I was scared on the plane.  I am afraid to die.”

I took her hand.

“Do you think about that a lot?” I asked.

“Where were you before you were born, sweetie?”

“Well, God was with you then, and God is with you now, and God will be with you when you die, but that's not going to happen for a long, long time.” I said.

I'm sad to know she is burdened by these fears, but glad we'd had a chance to talking about it.  Even happier to know tha she and Sterling talk about them, happy she has someone to make plans with and help figure out the world.

Finally we make it to the house and Carolyn and Caitlin run out to greet us.  Kelly gets out, looks around the neat neighborhood and says, “This ain't no beach!”

I laugh and we go inside.  She is well pleased with the house, a little less so with having to share a room and bath with Mom (how boring!) but it's the best solution so she accepts it.  Soon I hear her in there talking to herself, relieved at being able to do her evening routine in the careful steps to which she is accustomed.

This morning Kelly woke up happy and wanted pancakes for breakfast. 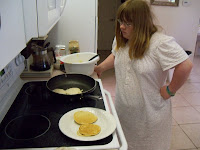 “Well, you make them if you want them,” I said.  I helped her get started but she took it from there, standing at the stove, created an admirable pile of tasty if odd-shaped pancakes.  Everyone helped themselves and she was justly proud of her accomplishment. 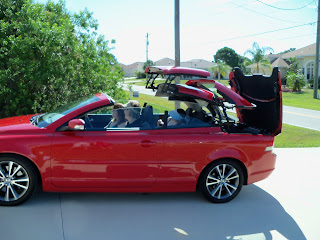 After exiting the garage, Carolyn pushed the button to take the top down the top.  Kelly was startled and then delighted as the top began disconnecting and folding down in to its back compartment. “This is MY kind of car!” she crowed.

The beach was stunningly beautiful.  She spent hours chatting with the sisters, bobbing in the surf.  Despite copious applications of sun screen, she got burned, and we had to buy some Solarcaine to take out the sting.

As for me, I floated in the green waters and contemplated 50 years of motherhood.  For the first time, I saw my daughters–all my daughters–for the competent, loving, secure women they are,  almost undone by the feeling of gratitude that came over me.  Gone was the sense that one had been left behind. 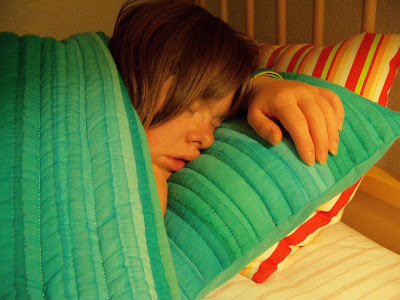