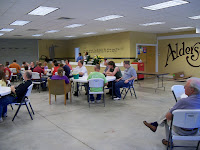 Jerry and I drove up to Brownwood last week to visit Aldersgate Enrichment Center.  I'd been there many years ago, having discovered it driving back and forth to Abilene, where I grew up.

The Methodist Men of Central Texas, inspired by a visit to the Baddour Center in Senatobia, MS, originally began Aldersgate as a work center for men with borderline intellectual disabilities that handicapped them as far as making their own way in the world, but that also made them a low priority for intervention and services.

They are the guys who fall through the cracks, who can become easy prey for petty criminals and often wind up in the criminal justice system. 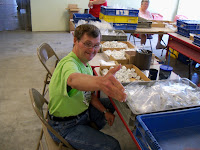 When I first visited, Aldersgate already had a thriving workshop going.  Men–and by that time women–built pallets, assembled plumbing repair kits, had contracts to clean roadside parks, and worked in a variety of other small industries.  It was a bustling, busy place, clearly loved and appreciated by those for whom it represented a unique opportunity for young adults with disabilities whose options had dwindled after the end of high school.

When we drove up shortly before 8:00AM to the community center where we would join the staff and Associates for morning devotions, we were greeted before we could even get out of the car.  Associates were eager to meet us, to know where we came from, and to tell us their plans for the upcoming weekend.  It was a familiar and welcome routine to us. 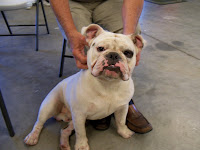 We toured the work areas, met a lot of Associates, and went through one of the two large houses that are now home to 14 Associates and will soon welcome up to 7 more.  It's just coincidence that Down Home Ranch also has 21 residents.  (Many more work full and part-time in the industries.) 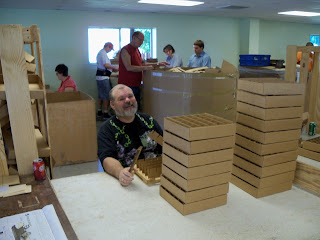 Director Michelle Thomas and other staff members spent valuable time answering our questions.  Probably of all the places we've visited in Texas, Aldersgate is the closest to Down Home Ranch insofar as the founding vision is concerned.  There is a clear sense of pride in workmanship and of place that runs throughout the whole community.  There's the same sense of mssion in the staff, the same familiar ease between them and the Associates.

I think the most basic similarity is this: both Aldersgate and Down Home Ranch expect a lot more out of the people we serve than do a lot of places.  We're serious about the work we do.  We know it matters and we depend on it for our common well-being.