I went over to Teresa House the other day to fetch Abi home.

Abi the maltipoo (named after Austin Bergstrom International, where Denise found her shivering in the rain two years ago) stays there most days with Miss Sandy for “doggy day-care.” 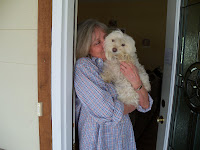 (Sandy adores Abi and takes her to town at least once a day and buys her treats. This is why Abi has developed a pot belly and no longer resembles a hairy road bump, as one of our young staffers observed, but now looks more like a hairy fire plug.)

It was after supper and almost dark when I arrived and the ladies had just finished a fire drill so they were all on the porch.

“Judy,” Terry breathlessly asked when I arrived, “did you hear about the possum?”  I had not. 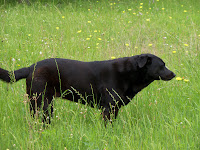 Lady, the fat black lab who also lives at Teresa House, had started barking like crazy the night before at something on the porch. They let her out and a large possum was enjoying the contents of Lady’s food bowl.

Lady was not amused, and before anybody could stop her had the possum by the neck, shaking it wildly back and forth.

Everyone was yelling and finally Sandy hollered, “STOP, LADY!” and Lady dropped the critter, which curled up sideways, rolled its eyes back in its head and let its pointy little possum teeth show, ever so still. 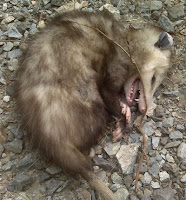 Which is called “playing possum” because, well, that’s what possums do.

“We were scared it would bite Lady,” said Natalie.

“It was soooo ugly!” remarked Kara, folding her arms and rolling her eyes.

Ms. Possum wandered away some time after the commotion died down and has not ventured back, probably a wise decision.

And Abi and I went home, watching for beady little eyes in the dark.