One of the most frustrating aspects of running Down Home Ranch is trying to find good people to live in the houses with our Ranchers. I’m not saying the job is easy. Jerry and I did it for 41/2 years, and we know.  Admittedly, it’s a challenge, but what important job isn’t? The years in Gabriel House I still count as among the  happiest of my adult life.

Being a Resident Assistant is a lot like parenthood in that it requires you to be there—really be there. Not sitting on the couch with your nose in a book, or staring out the window pondering your existence. You are defender, teacher, friend, confidant and coach all rolled up into one.  Not to mention chief cook.  If you want to matter in life, be the cook.

My mantra is this: Being an RA is the easiest job in the world to do poorly, and the hardest to do well. That’s because you really have to be self-motivated to keep up the energy level in the home. It’s easy to sit back and do the minimum required, but alas, that’s when the fun (and the effectiveness) drains out of the job.

So…I got to thinking about the scene in Mary Poppins, when the children decide to make up a list of qualifications for the perfect nanny. I thought: Why not ask the guys who their “perfect” RA would be?

So I went out in search of the four men of Barnabas House, who were on morning break from their jobs. 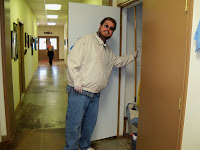 Andrew immediately asked, “Well, Judy, what are my choices here?” Good question, but I was speaking hypothetically.

“Well, you tell me, Andrew—what kind of person would you like in the house?” I asked.

Alas, Andrew was not up for hypothetical.

“Well,” he said, raising his hands up in the air in a gesture of impatience, “I really need to know what the choices are, my friend.”

I asked if it was important to have someone who likes to fish, because Andrew loves to fish and it’s his favorite topic of conversation. But no, he said, that wasn’t important. He then named two people he’d had as house managers in the past at other agencies. Coincidentally, I knew them both, so that gave me some idea of what he was thinking. 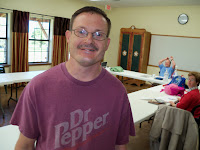 Michael said he definitely wants somebody who likes to take walks in the evenings down in the pecan bottoms and Alan chimed in, nodding enthusiastically, “Yeah, you know, somebody that likes to do that, you know–go for walks and stuff.” 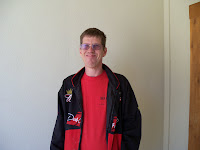 Brent didn’t want to be bothered to talk about it, and when I persisted, he said he wanted someone who wouldn’t bother him too much. I took the hint and quit bothering him.
So what I think we’re looking for is a kind, patient, out-doorsy type with a good sense of humor who backs off when requested. We’ve decided that for this house a couple would be considered,  so two kind, patient, out-doorsy types with a good sense of humor might work, too.
Naturally there’s more to the job description, which you can see on the website if you’re curious.
Meanwhile, these four greats guys are having to put up with a different staff person every night of the week, and they deserve better than that. So, spread the word, share this blog, tell your friends. 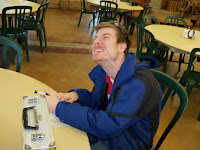 Michael, Brent, Andrew, and Alan are looking for a new housemate, and the person fitting the bill doesn’t even have to float in on an umbrella, although if that could be arranged it would be highly entertaining.