The Gala is coming! On April 10 the Quebe Sisters Band will entertain at our annual big fundraiser, and the Ranchers are making sure they’ll be able to do that good old Texas swing.

We’ve been having Tuesday night practice sessions with Denise and Don leading the way. I missed the first one, but was there last night and what a hoot!

Our PUSH guys, here for spring break building fences, installing lanterns, building decks, and various other projects, got washed out by the big rains yesterday, so they were still in pretty good shape for dancing. 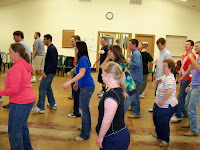 Wow, enough guy partners to go around and extras to boot. That’s a first!
Denise led folks in the basic steps and got them good and warmed up. Then I took over to teach the Virginia Reel. Been a while, but I found my groove and got a 13-partner line going.  An hour later we were all exhausted!
Jerry and I first learned the reel during Yam Bake days way back when. Rich McMath (see Rick call a contra dance) called the dances and the Double Eagle String Band played under the big tent the Austin Baptist Association lent us every year. After several years of that we finally nailed it, even if we only did get to do it once a year or so.

Yam Bake’s given way to The Ranch RoundUp Golf and Gala Weekend, a bit more upscale and not dependent on the weather, which is a big plus.  (We’ll never forget the innumerable 10-year old boys during Yam Bake ’97 who discovered you could slide a really long way in the red slippery mud if you got a good running start. Parents were variously amused, at least until time to load up the car. We gave out a great number of large plastic trash bags that night as I recall.)

Anyway, we spent another hour working just on the reel.
The reason the PUSH guys are here to begin with is to perform service projects on behalf of people with intellectual disabilities.  Sounds noble and uplifting, but maybe not so much fun.  Dancing brought us all together–just a happy bunch of equally confused people trying to get it right.  As the evening wore on, we did, and it was magic.

And truth to tell, we're pretty good at creating that.  Come to the Gala and see for yourself.