Today is granddaughter #1 Jessica's birthday.  For a short few months she gets to be the same age as Aunt Kelly: 27.

Caitlin, #2, came along a few months past Jess, and Noah, #3 a few years after Caitie.

Though I have no regrets about becoming Kelly's mom at the age of 42, I must admit that having babies and grandbabies at the same time compromised my grandmothering role.

First of all, I was as busy and preoccupied on the mothering front as my daughters were.  I had to hand Kelly off in order to hold and ooh and ah over Jess or Caitie.  By the time Noah came Kelly would burst into tears if I even reached for him.  Like I say, it cramped my style!

But her nieces and nephews have played the role of cousins in Kelly's life, even though she very much sees herself as Aunt Kelly to them.  In the very early years they were a natural playgroup, but as they got older and Kelly's handicap became obvious, each of the grandkids, in their own time and way, came to an understanding and acceptance.

By the age of three, Jessica had already taken on a (small) playground bully to defend her Aunt Kelly.  “Don't you make fun of my Aunt Kelly!” she yelled, fists at the ready and flying in his face. 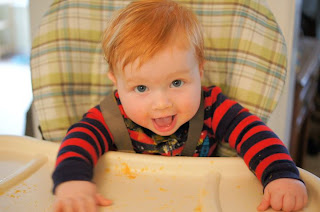 And now comes the new generation, in the form of Mr. Happy Guy, the ginger man himself, Adam, son of Caitie and Aaron, and absolute possessor of Nana's heart these days.

I was privileged to spend a few days with Adam, now six months, and with Caitie and the rest of the family last week in Kansas.  Caitie and I got to talking about this and that, and somehow got onto the topic of family planning.

“Well,” I said.  “Certainly means were available to plan pregnancies back when I first got married, but in fact only one of my four was planned.  And it was no big deal, really, because I always expected to have kids, and I expected to have them early.  It was a given.” 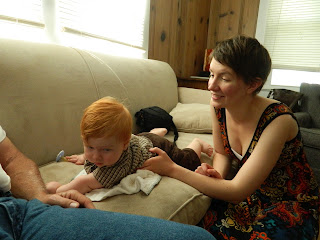 I think it all sounded a bit willy-nilly to my Caitlin, but it wasn't, really.  In our minds there was a place for each, waiting in readiness for their arrival, but recognizable only after the fact.  When each did arrive I exclaimed in wonder, “Oh!  I didn't know it was going to be you!” as if I'd known them all my life.

Which in some sense, I believe I had.

So Happy Birthday, Jessica!  You were meant to be here with your wonderful parents and we thank God and pray blessings upon you every day.