Tomorrow is Epiphany, or Three Kings Day to some.

I spent Thursday afternoon making hot chocolate, getting the robes, candles, and other props ready for our celebration.

The Ranchers were to meet at 7:00 in front of the Pavilion.  Luckily, it was a mild night for the beginning of winter.
﻿

﻿
When all were gathered we drew names to see who would play the Three Kings bringing gifts to the Christ child, and fate decreed that we would have two queens and a king.  Crystal would play the Virgin Mary, and Clyde Joseph.

There was general hilarity and ribbing as we donned our costumes, but when we lit the candles for the procession, all fell quiet.  I read the passage from Matthew about the Three Kings, and off we went.

We entered the darkened Pavilion with only our candles for light.  The Three Royal people led the way, bearing their gifts.  Pilgrims followed bearing light.  Along the way we sang “We Three Kings of Orient Are.” 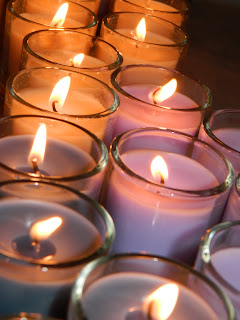 Once we'd reached the creche, the Three Royal People presented their gifts, and the rest of us placed our candles before the babe.  We sang “Away in a Manger.”
After a rousing chorus of “This Little Light of Mine” it was time to serve the hot chocolate and rosca de reyes, the traditional Mexican pastry baked in a ring and containing an image of the baby Jesus.  According to lore, the person finding the baby Jesus in his piece must give a party some days hence.  (We'd already decided that the house the winner lived in would host the Superbowl…talk about moving out of the sacred and into the secular!)
I had put a pretty big baby Jesus in the pastry to make certain there was no chance of his disappearing down someone's gullet!

The Three Royals put away their costumes and dug in.