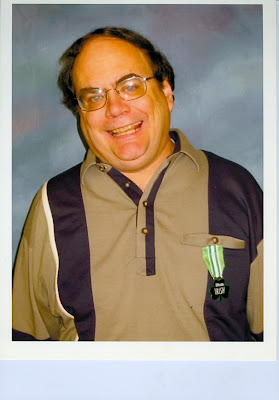 Kevin Patrick Tracy was born January 14, 1949 in Freeport, IL.  His father's first cousin was the famed actor Spencer Tracy who was an enduring and caring presence in the family’s life.

Kevin died December 1, 2011, following a grueling four-month battle for his life. His sister Colleen fought right along beside him through it all.

I first met Kevin when he worked at the ARC of Texas, coordinating the Advocates Program for adults with mental disabilities served by the ARC.  Kevin organized conferences and trainings statewide, published a newsletter that went out to people with intellectual disabilities all over the state, and was widely recognized for his dedication to his work.

Jerry was working under the auspices of the ARC in the early 90s, administering a grant project and got to know Kevin as a colleague.

The day before Thanksgiving of ‘92, as Jerry was closing his office to come home for the four-day break, he asked Kevin casually what his plans were for Thanksgiving. Kevin said he figured he’d pick up something at the grocery store and watch the games on TV. Jerry insisted he join us in our little mobile home at the Ranch (actually at that point it was the Ranch.)

Kevin showed up a few hours before dinner, thoughtful gift in hand. I made sure he had a nice take-away meal from the leftovers and he left before the sun went down.

He returned for Christmas, and Easter, and then we all began to say, “Kevin, we can’t eat turkey without you.”

Kevin evidenced a baffling disability at an early age, serious enough that he was placed in St. Colletta’s School for Exceptional Children, which is where Rosemary Kennedy lived, and one of the most respected options for children and young adults with intellectual disabilities at the time. Cousin Spence was instrumental in making this happen.

As for the nature of the disability, I myself quickly diagnosed Asperger’s syndrome, or what we nowadays refer to as high-functioning autism, or autism spectrum.

Whatever, Kevin was far more than a diagnosis.  He was bright, verbal, and read novels, biographies and histories avidly. For reasons we never quite figured out, he was a great fan of the British royal family, and could do a deadpan imitation of Elizabeth II that was “spot on,” as they say.

In fact, since we had no family in common, the royal family became our own surrogate collection of wayward relatives, about whom we gossiped and clucked all during the 90s, as the House of Windsor provided endless fodder.  I recall that Kevin loved to quote QE II's summation of one year as her annus horribilus.

After leaving St. Coletta’s, Kevin relocated to Arizona where he took a position running the state Advocates program. From there he came to Austin and continued his work.

During our holidays we were occasionally joined by “The Fair Colleen,” Kevin’s sister, who lives in Florida, and our circle was expanded. This was especially comforting in the odd years of Christmas, when our daughters and families spend Christmas with their in-laws.

Once while working for the Texas ARC, Kevin and Jerry attended a conference in Buffalo, New York. After hours they were driving around and discovered that a the presentation of Handel’s Messiah would be performed that evening at the cathedral, featuring boy sopranos from King’s College, Oxford, which they attended and talked about for weeks to come.

Kevin’s love for the Catholic Church was profound and genuine and when Jerry converted to Catholicism in the mid-90s Kevin became his sponsor.  He faithfully showed up for the weekly “scrutinies” and proudly stood with his hand on Jerry's shoulder as he was received into the Church.  Likewise Kevin stood as witness as we were married in the church some weeks later.

Kevin rather unkindly contrasted his church’s choir (St. Louis, Austin) with our own little effort, which I headed up as best I could (Sacred Heart, Elgin). He was very proud of his church, and happy when we made it ours as well.

In due time, Kevin decided to leave the ARC, and went to work for Travis County MHMR. Unfortunately, the work climate there was quite different from the supportive environment of the ARC.

Kevin had been long plagued with asthma, complicated by stress and anxiety, which he endured in abundance while working at the agency, and he suffered financial set-backs during this time which didn’t help. Finally, he left his position there for health reasons.

In the years following, Kevin's life became fraught with financial uncertainty and employment difficulties.  We and other old friends tried to help out, but the situation was tricky. Kevin was his own man, and our advice was neither entirely welcome nor often heeded. His physical difficulties by now included diabetes. A crushing blow came when he lost his house and he and housemate Bobby had to move to an apartment.

It was always apparent that Kevin’s disability played a part in his difficulties in life, but it was less often easy to see exactly how.  Yes, he was taken advantage of in ways that Jerry and I would have seen coming a mile away. There was a lack of guile in him that made it hard for him to believe that someone seemingly wanting to befriend him could have less than noble intentions.

The last few times we invited Kevin to a holiday dinner, he failed to come. He was working at Wal-Mart by this time, and sometimes scheduled to work on the holiday in question.  Other times he physically was just not up to it.

Early last August I got a call.

“I’m in the hospital,” he croaked.

Next day I went to see him, and was horrified. He couldn’t talk, looked dreadful, and had no patience with my usual joking inquiries about the royal family (though he did agree to take The King’s Speech DVD I’d brought).

I asked him if he wanted me to pray, and he nodded yes. I recited the 23rd Psalm, always a comfort to me, and prayed for his recovery. He squeezed my hand.

Still, I went home and told Jerry, “He’s not going to make it.”

Within hours Kevin was taken to ICU, in septic shock. Colleen arrived from Florida. From that time on it has been an unending trial. First his kidneys failed, then he had to go on a ventilator. By the third septic shock he had lost the use of his arms and legs.

If I could wish these past four months away, especially considering it all ended in Kevin’s death anyway, I have to think carefully about whether I really would.

Yes, he suffered so. Why couldn’t he have gone quickly?  But there is more to the story than that.

For one thing, I witnessed a sister’s love so deep and unshakeable it fair took my breath away. Day after day, Colleen was there for Kevin, immersed in the daily detail of his incredible struggle to live.

Colleen and I have become close, as she has become close to other friends of Kevin. She has gotten to know her brother better through the friends he has left behind, and we have been privileged to join her for part of this hard journey.

I’m never comfortable attributing the way things work out to any plan of God. I rather share Woody Allen’s feeling that if I don’t know how the can opener works, what can I know about God?

Still, we have our marching orders.  Thy kingdom come, thy will be done.

I think most of us who knew Kevin probably feel we didn’t do enough for him. In many ways, he was a better friend to us than we turned out being to him.  Now we best honor his life by caring for those he cared for.

One of the things Kevin taught me is that we are happier once we simply accept what others have to give and we relinquish our expectations or demands that they provide us what we want.

So we gather our memories together, and remember Kevin as he was in all his life, not just the hard last months. He lived his life on this earth, and we walked a while with him on the journey.

Now his journey has ended, and we happily find new people on our path, so we join hands and, in the words of King George VI of England, “Keep calm, and carry on” until such time comes, as it will, when our own journeys end.