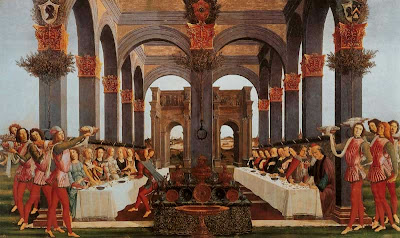 Yesterday as Jerry and I drove into Austin I read the scriptures for today's Mass readings.  The gospel was Jesus' parable about the King who invited people to his son's wedding feast, but everybody was too busy, saying “Nah, I gotta work this weekend” or “Sorry, I already have plans.”

Well, words to that effect.  Plus a few murdered the men he'd sent with the invitation!

The King was insulted, so after wreaking a bit of havoc upon those who had refused his invitation the first time, he once again sent his minions out to bring guests to his son's wedding feast, but this time they weren't to bother with the list of the in crowd, but to bring in any old whobody they found on the street who wanted to come.

The last part of the parable was in brackets, which means it doesn't have to be read if the preacher doesn't want to deal with it, and this was the part about the guest who showed up and the King asked him why he'd not put on his wedding attire.  The guest had no good answer, so the King told his people to bind him hand and foot and cast him out into the darkness where there would be gnashing of teeth and other unpleasantness awaiting him.

“Wow,” said Jerry.  “I'll be interested to see what Fr. Larry has to say about this last part.”

But Fr. Larry does not quail before the words between the brackets.  And what he said, assuming I heard aright, was that the wedding guest's attire or lack thereof referred to his spiritual state, not his sartorial one.  He came not to celebrate the wedding of his soul with that of the King's Son, but for some other reason.  So as things wound up, he fared no better than those who chose not to come at all.

Later Jer and I talked about it some more, debating just what state one's soul had to be in before it was worthy to come to the feast.

In our profession there's a time-honored rule: Don't punish the disability.

By this, we mean, don't punish people for what they have no control over.  People with obsessive-compulsive disorder will never be punished, bribed, or nagged out of their condition.  It's their disability.  They can still manage to drive you crazy, even if you know that, which fact might constitute your disability.

The longer I'm in the business, I realize we all have disabilities, of all kinds, many we don't even know about.  We struggle against them, and like Paul, despair of our inability to overcome them.  Throughout our lives, we kid ourselves if we ever think we've made it.  Life is nothing if not a thorough education in humility.

And given that, the proper wedding attire must be the mantle of humility before the King, as we seek new life in Him who, having made us, understands us as no one on earth, ourselves included, ever could.