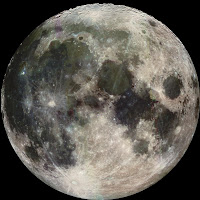 It's once of those staff-crunch times at Down Home Ranch.  We're all doing double and sometimes triple duty as we deal with unexpected staff departures and unfilled new positions.

Changing our “food culture” at Down Home Ranch has been a challenge, to say the least.  We once again have begun grappling with the need to exercise stricter control over the food provided the Ranchers.

So as to get started in this venture, I agreed to serve as interim FWC until we can find that perfect person.

Well, at least I knew what I was getting into.  Suffice it to say that rising long before dawn is part and parcel of the package.  So many things to think of, so many items needing attention, so much to learn and relearn.

So here I was in my office about 6:00 AM when Mr. Lobo appeared at the door.

Of course I'd seen the moon…but then, had I really?   I'd walked out the door, thankful for its light so I could find my car at 5:30 AM, and glanced up at it.

But I didn't really see it.

I went outside with Mr. Lobo and together we beheld its shocking presence in the western sky.  We marveled at it  and Mr. Lobo told stories of how he'd gotten his kids up one night to watch all the planets align in the sky one night in the 80s.

I told of the awesome array of stars I'd seen during the leonid meteor showers in the mountains of Colorado back in the 60s.

Two old friends, standing in the dust at dawn, beholding the heavens.

Thanks be to God.