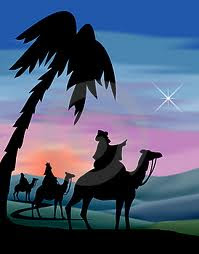 I wasn't ready for Epiphany to come so soon!  Usually we have ten to 12 days to bask in the light of the Christmas tree, but today in church we celebrated Epiphany.

Fr. Larry talked about how pervasive the images of Epiphany are in our culture–the Kings, the camels, the star, the Holy Family, the King Herod, the gifts, and of course the precious Babe lying in the manger.  Everybody recognizes them, even if they aren't sure what they all mean.

Fr. Larry said that one thing they mean is this: Each of us carries wisdom, a star that we're following, at least a touch of King Herod, and–hopefully–love, within us.  Each of us has gifts to give.  We struggle between what we believe is the security of what we have and accepting the invitation of the One who came into the world with nothing to offer but Himself.

After church, I came home and spent a couple of hours cleaning my car inside and out, mostly to have an excuse to spend the beautiful afternoon outside.  As I was vacuuming away, Fr. Greg arrived with Jim, returning after the holidays. 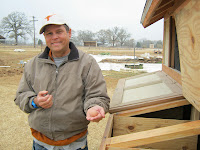 After Fr. Greg  got Jim settled into Timothy House and left I called and asked Jim if he wanted to walk down and see if the hens had laid any eggs today.  He did.  We stopped by Barnabas House to drop off a gift from Jim to the guys there, said hi to Mike sitting on the porch of Gabriel House, and walked mostly in silence to the Chicken Hilton.

We found a dozen eggs of different sizes and hues, and then went to the garden to check out the broccoli and cabbages.  I was afraid the recent freezes had damaged the cabbages, but they were fine, so I cut a few small ones for dinner tonight.

On the way back to the Village, I asked Jim if he wanted to eat with Barnabas House tonight or have Jerry's famous fried chicken and potato salad with us.  A little smile crossed his face and he said softly, “Fried chicken with you and Jerry.”

That said, we settled on a time and walked to Timothy House.  After I left Jim I saw Kristen doing her walk around the Village Road.  She had her headphones on and was singing away as she walked.  Above us the sky was deep blue and criss-crossed with contrails. 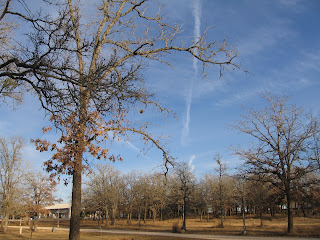 There was no wind, not even a breeze, and the late afternoon light was startlingly clear.

“Everything is so calm and bright,” I thought to myself, and then laughed at my choice of words.

Anita came by just as I reached Benedict House and swung into the drive.  She confessed that the day had been hard for her.  Anita just moved into Teresa House, leaving her daughter Alaina at Martha House.

“This is the first Sunday of her life that I haven't taken care of every little detail of her getting ready for church,” Anita said.  “I held out as long as I could and then I just had to call Naomi and check on how things were going.”

When Kelly moved to Martha House five years ago, I felt her absence so strongly it was almost a presence in itself.  The scared old king inside me so wanted things to stay the same, to have her there by me, to get those daily hugs, those dozen “I love yous.”

Back then I needed to remind myself that the vision that was given to us of the Ranch came from a wiser place than that, and it was time to let my baby go and spread her wings a bit.  I feel for my friend.  I know how much faith and courage it takes.

It's been a lovely day, unhurried and unharried, finding glory in the ordinary.  A gift indeed.