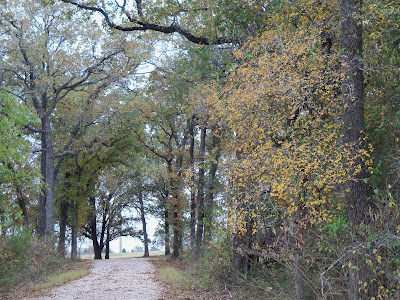 Jerry and I went on a cruise in mid-November.  We had a good time, but were stunned and heartbroken by the news of our colleague Jim's death.  I knew this would hit the Ranchers like a ton of bricks and longed to be with them at such a sad time.  However, Phil assured me I could trust our staff, and what's more, I could trust the Ranchers to see one another through it. He said that in effect, Jerry and I were there because of the community we had helped create.

And so it was.  As things turned out, I was the one sobbing all alone at an internet terminal on a huge ship in the middle of the ocean.  Fellow passengers brought me tissues and someone patted my shoulder warmly in passing, which was much appreciated, but how I could have used some of those Rancher hugs at a time like that.

We are having our own service Tuesday afternoon to honor this good, much-loved man.  Rebekah's dad Fr. John Williams will lead the service.

And needless to say we were quickly swept back up into Ranch life.  Two new calves were born on Monday and are doing fine.  Our little Dude, born three weeks too early and still being bottle fed in the barn, got sick and Jerry, Crystal and I loaded him into an old delivery van and drove him to Taylor to see Dr. Graef.

The Dude felt awful, and I thought it was his ear.  My grandmother always told us kids when we were trying hard to look pitiful, “You look like a dying calf in a hail storm!”  I finally got the picture, too, as the Dude lay sprawled over Crystal and me, twisting his neck around to gaze at us with his huge, inky-black eyes.

Shortly before reaching Taylor, he scrambled up to his feet and promptly peed all over me.  Oh well, just another adventure along the road…

Actually, it was a good sign, or so said the doc.

After the Dude was shot up with painkillers and antibiotics (indeed it was an ear infection), we headed home, where he downed a half gallon of milk and skipped about feeling no pain, at least for a while.

Though bigger than his little cousins, he is at about the same stage of development.  We will put him out with them in a few more weeks, though we'll need to continue to bottle feed for another few months.

Then it was Tuesday, and we had our community Thanksgiving.  It was fun (and delicious), and the Ranchers began heading for home right away.

On Thanksgiving Day, the weather was warm and humid.  About 1:00 PM I stood in front of the house with Jerry and was complaining about the sticky weather when woosh! Out of the north came a mighty wind, cold and dry, blasting the oak leaves off the trees and picking up the fallen leaves from the ground, swooping them up high in the sky 30 or 40 feet, spiraling all around us. The thermometer dived from 80 to 45 over the next few hours.

Julia, Terry, and Natalie were still at home with Sandy on Thanksgiving Day, and of course Kelly is with Jerry and me, so we all had a fine time at Benedict House.  I put on the full feast of turkey, dressing, gravy, sweet potatoes, mashed potatoes, green beans, Challah bread, chocolate pie, pumpkin pie, whipped cream, cranberry sauce.  Jerry made the deep-dish enchilada, the stuffed celery, and the deviled eggs.

Weight Watchers, where art thou?

Anyway, we don't have to cook for a while.  After dinner we settled in to watch the Aggies and the Longhorns go at it.  Jerry grumped off to be when it was clear the Ags would win, but Kelly and I stayed til the satisfying end.

I'd have been an Aggie myself, but I was gender-challenged for that particular assignment in those ancient times.  I plan to ask Gov. Perry to do something about this situation.

Today the Ranchers are trickling back in.  Kelly will soon load up her bike and head up to Martha House.  In the weeks ahead we'll be packing poinsettias like crazy, going on deliveries, getting into the Christmas spirit.