The Dude continues to do well.  On Monday he was standing up when I came into the barn and voluntarily nursed from the bottle for the first time.  Once he figured that out he began to gain strength quickly and Tuesday took a walk with me to see the office staff across the parking lot.

CJ, Annette, Kristin, and Sharon all came running out.  We'd figured he had less than a 50-50 chance of making it, and here he was toddling about, clumsy as all get out trying to figure out what to do with those four long knobby legs.

He's probably added eight pounds of body weight in the past three days and is noticeably stronger every day.  Watching him this morning  I got to thinking of all the Disney movies depicting young animals trying to get their land legs–Bambi and lambs came to mind most immediately. 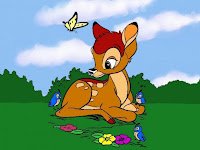 These days of course they just film live creatures with sensors attached all over them and the animation is done via computers.  But way back when the Disney artists were drawing those frames one by one.

I grew up in town and seldom saw baby farm animals.  I learned what they look like and how they act just after being born from Disney movies, and I can only imagine how many hours of footage of baby animals those artists watched before they set to work.

They did in their brains and with their hands what we now do with technology, and they nailed it dead on.  I see that in all the Dude's little awkward stumbles and falls, the way he lowers his neck and angles his head up and pitifully cries “Moo!” when he's hungry.

Jennifer and I were laughing yesterday about the “letdown bump,” which our male Ranchers quickly learned to watch out for.  While feeding, calves periodically whack their mother's milk bag with a fast, strong upward bump of the nose to cause more milk to let down into the udders.

This reflex continues when they're hungry even when they're bottle-fed.  Since the action takes place pretty close to an adult person's–shall we say–“nether regions” a guy in particular can get a rather painful surprise! Now the guys' hands immediately fly to protect themselves whenever the Dude approaches them.

My guess is that in each case it was one-trial learning!