Yesterday afternoon Fr. John Williams, aka Rebekah's dad, came out to the Ranch for our annual Blessing of the Animals. 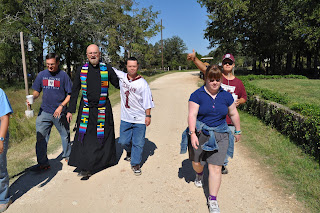 People were pretty tired from haying in the morning, but a good contingent trooped off in seach of those creatures great and small for whom Down Home Ranch is also home.  Given the current abundance of said creatures, Fr. John suggested that we select a few “stations” from which to bless, since tracking each one of them down was not practical, and in some cases unwise (such as Peggy Sue, the Longhorn, who holds some sort of bovine grudge against me).

And so we set out from the Pavilion towards  the Village, where Missy, Barny, Abi, and Lady all reside.

Missy the yellow Labrador is off in Texarkana with Anita, mistress of Martha House, so we went on to our first stop at Barnabas House, where little Barny lives.  He was excited to see us, and happy enough to be blessed, but what he really wanted was to go for a walk, so I suggested we put him on a leash and bring him along.
“Maybe not a good idea,” said Michael, who is one of Barny's four owners, and proprieter of a huge aquarium housing a multitude of fish.  I quickly deferred to his opinion.

After that we headed to Teresa House, home of Abi and Lady.  Abi is enthralled with attention from anyone but a veterinarian, so she was delighted to sit in Fr. John's lap and receive her blessing.  Lady watched amiably from a distance.

Next stop was “the new” Joseph House, which Sterling, John, Kyle, and Travis are hoping to move into sometime in the next few months.  Fr. John asked each person to name the home in the Village where they lived or would live, and asked God's blessing on our homes.

I was touched to see Kelly reach out to put her hand on Joseph House as it received its blessing.

From there it was to the top of the haying field, the highest point on the Ranch.

Fr. John explained that St. Francis was considered strange by his contemporaries, because he so loved creation that he would stand in a field and dance, holding up his arms and spinning around.  He urged us all never to worry about what other people say about us, but like St. Francis, to rejoice in the beauty of the world.

From the hill, the horses, donkeys, cows, foxes, fish, turtles, armadillos, skunks, racoons, wild pigs and all other creatures on the Ranch received their blessing.

“And bless all the horse poop, too,” Kyle said earnestly, which elicited a few disapproving murmurs, but I knew Kyle was remembering what we'd told him about how the horse manure he collects and takes to the compost piles enriches and gives back to the earth.

Later on in the afternoon Jerry popped into my office and said, “I've got to run to Bloomer's and pick up some winter veggie packets.  Be back in an hour.”

As I left my office, I saw him digging in the garden and went over to investigate.  He'd bought brussels sprounts and broccoli, pansies and peas and was planting them in the beds.  Our adolescent rooster was practicing crowing (pretty funny at this stage) and the evening sun slanted across the newly mown hay field.

In that moment, I knew exactly what St. Francis had been getting at.