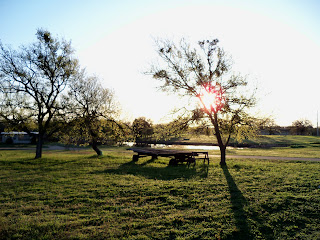 Stephen Covey says everything that comes to be is created twice–first in the imagination and then in the material world.

So at Staff Meeting yesterday morning Jerry showed everyone a little pamphlet he and I made up and sent out way back in 1989.  In it we described the Ranch, years before it would be built, but already real and alive in our imagination.

Down Home Ranch was described as if it had already come to be, long before we had even seen the land where it would come to be or met the multitude of people who would help us bring it into being.

Some things didn't turn out exactly the same.  The Ranch is on 340 acres instead of 125.  The housing pattern is different, and there are only 35 of us living on the Ranch as opposed to the 85 we envisioned.

But what strikes everyone is how close the heart of the dream described in that pamphlet from 21 years ago is to the reality that is the Ranch today. 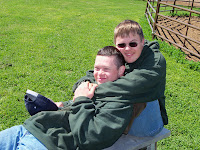 It spoke of a community where people with Down syndrome can live with dignity, where they can perform real work that matters, where they can explore their spiritual relationships and continue lifelong education in the midst of a loving community consisting of other people who want to do the same.  Above all, it would be a community of encouragement and a place to forge true, enduring friendships that can last a lifetime.

We envisioned homes, a bakery, a woodshop, gardens, greenhouses, crafts, stables and barns, horses, cattle, chickens, dogs and cats and even a swimming pool.

Nobody is as astonished as Jerry and I when we walk out in the morning and look around and–there it is!  People say, “Oh, you must be so proud,” but nothing could be further from the truth.

Far from proud, we feel humble and somewhat stunned.  We look back and marvel at the goodness of literally thousands of people, living and dead, who provided the means to build this place, who serve as staff, who volunteer, and who serve on our board.  We also realize that we have been phenomenally lucky in ways it has taken years to recognize.

“Down Home Ranch was first and foremost a place for persons with Down syndrome to live and to work, to love and be loved.  To laugh, to cry, to grieve, to labor, to play, to sing and dance.  Others with physical or mental differences and challenges also became “Ranchers.”  The Ranch depended upon these Ranchers, and they upon DHR.  All Ranchers, as well as DHR staff, shared in the successes and failures of the Ranch.” 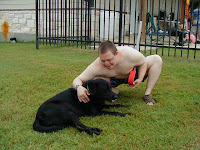 That was the dream.  Now we daily live the reality.

I left the staff meeting and walked out into the cool morning.  Christopher, whom we've known since he was a toddler and who has lived at the Ranch for several years, had settled himself down next to Lady, our old fat black lab.  Christopher was earnestly singing “The Sun Will Come Out Tomorrow” to Lady, who looked soulfully into Christopher's face as he sang and gestured.

I can't think of a better way to start the day.