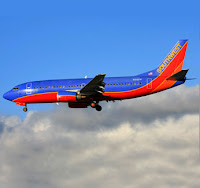 The travellers have returned.

Kelly and Sterling headed off with Casey to fly to Kansas last Thursday, a trip they've made many times before but always on a direct flight.

Now there are no direct flights between KC and Austin, and even though the plane change was just at Love Field, we were nervous about their negotiating it all by themselves.  After thinking it over, we decided to send Casey, the Ranch Case Manager, along on the first leg to do some real-life training.

Don't think I've never tried!  On many a flight together I would stand with Kelly at the Arrival-Departure boards doing everything but twisting her ear to make her look at them and locate our next gate.  All I ever got were eye-rolls and sighs of exasperation.  Moms don't get no respect!

Casey, however, enjoys an exalted status here at the Ranch among the Ranchers.  If Casey says it you can count on it then it's right and it's true.  Casey is their wise counselor, slayer of dragons, advocate, Jewish mother and Dutch uncle all in one.  Because she performs these roles with  elan, humor, and compassion they love her.  And they listen to her.

So off they flew.

I called Casey late Thursday to see how things had gone. She said that–somewhat surprisingly–Kelly had taken the lead in locating the flight and the gate.  The most confusing part turned out to be distinguishing between the arrivals and departures screens. 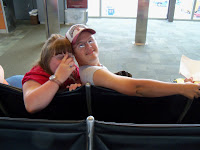 Kelly found the flight and the gate, figured out which way to walk, and got them to the gate, which was just up the hall a ways.  Casey saw them off and waited for her flight, which got delayed for several hours.  She made the next one on stand-by, but then the flight crew discovered 10 minutes out that a baggage door had not been closed and the cabin wouldn't pressurize, so back to Love Field it was.  (No word on whether suitcases rained on De Soto and Red Oak or not.)

Yesterday they returned.  I'd told sister Carolyn to tell them to meet me in the baggage claim area.  In other words, I would not get a pass to meet them at the gate.  I wanted them to figure it out.

A few minutes after the plane landed my phone rang.

“Downstairs in baggage.  Where are you?”

“We here,” he said, irrefutably.

“You need to find the escalators and come down to where you get your bags.”

Five minutes later the phone rang again.  “We not find it.”

“Ask someone at a desk to help you,” I said.  I was determined not to intervene by alerting someone upstairs to direct them.

“Looking you talk on phone,” he said impishly.

I turned around and there they were, grins wide as–yes–Kansas itself.

They already had their bags.  It had been 30 minutes since the first phone call. 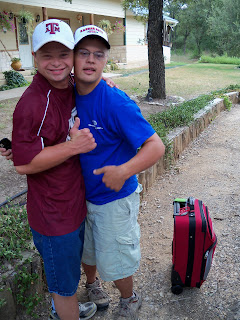 Off we went to Subway for lunch and a recap on the vacation, and then back to the Ranch.  At Martha House Kyle and Alaina were just returned from visiting Kyle's family in Seguin over the weekend, and there was much back-slapping and general merriment as suitcases were hauled in.

Our plan worked out to be, all in all, a great success.  Small steps open up big adventures.

And we're getting there.