Once many years ago, when Kelly was a toddler, I was in conversation with a man from San Antonio, which has nothing to do with anything except that's the only thing I remember about him, aside from what I here relate.

When he learned my daughter had Down syndrome, he spoke of a family friend and his wife who'd had a baby with the condition.  Then he said, “Fortunately, the child died young.”

My eyes were on Kelly as she sat on the carpet playing with a beam of late afternoon light that slanted through the window. 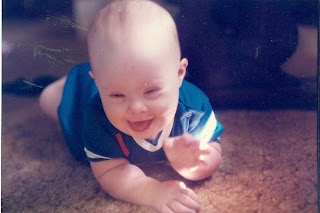 Hand in,
hand out.

I recall nothing more of the man's visit, not who he was nor why he was in my living room, what I said, or how long he stayed.  The curtain closes on that memory in deafened silence, with me staring at Kelly's hand:

Many years later, Jerry and I attended the funeral of a much-loved young woman who was among the first to come to Down Home Ranch.  She didn't have Down syndrome.  She seemed healthy as a horse.

Yet, unaccountably, one morning she died in bed shortly before dawn, and nobody ever knew why.  She was 30 years old.

At the funeral her dad was clearly heartbroken, but told us,  “My one consolation is that she went before me.  You know, that was my prayer for her, that she would always have me to look out for her and take care of her, so she'd have to go before me.  And my prayer was answered.”

Jerry and I understood what he meant (after all, Down Home Ranch is our attempt to keep on taking care of Kelly after we're gone and we'd be lying if we said it wasn't true) but our hearts were breaking for us.  We loved this woman.  She was one of a kind–loud, funny, opinionated–a true character, and we grieved the loss of her.  There was no consolation for us in her death.

But that's the terrible path we walk–those of us with children who need us forever.

Today Kelly flew off to Kansas with her boyfriend Sterling to visit her oldest sister Carolyn.  They are quite the accomplished travelers, given a packing list and enough numbers programmed into their cell phones.  Just to be on the safe side, since this is the first flight they've taken with a plane change on the way, we sent  Casey, our Case Manager, as far as Dallas to conduct an on-site training in gate-changing in hopes that next time they'll be able to navigate it by themselves.

In Kansas they will stay up too late, and laugh and giggle most of the night, and Sterling will exchange mock insults and barbs with (future) brother-in-law Bryan, who calls him “Sterling-darling” to annoy him.  They'll go swimming, to a movie, eat at Five Guys, and help a little with the farm chores (but probably not much).

In a hundred years, we'll all be gone.

But Lord, while we're here, lead us in the dance.