“What do you supposed UT thought when someone proposed starting a Shakespeare summer program way out here?” I asked Jerry as we wound our way around obscure country roads south of Hwy 290 and midway between Brenham and Giddings.

“About what people thought when we proposed starting Down Home Ranch where we did,” he replied, and I couldn't argue. Both venues seem unlikely at best.

But they did, and we did, and now we pile into the bus late each summer and make the 50 mile trek to see the comedy of the three-play cycle put on by students at the Winedale Institute, run by the University of Texas at Austin English Department. (This is unless Romeo and Juliet is on that year, and of course we go to that when it's offered.)

This year's comedy was Twelfth Night. 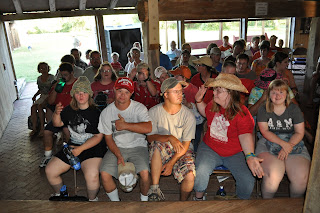 Perfect! A few years ago they made a movie called She's the Man, based on the plot of Twelfth Night so most of the Ranchers are vaguely familiar with the plot device of boy-girl twins, each believing the other dead in a shipwreck.

We had front-row seats, as requested.

I'm always amazed by our gang's fascination with live theatre. They are so into it–no squirming, no glancing at watches–nothing but rapt attention even through long dialogs with no action.
(It starts early. One day when Kelly was two she was playing in the living room when an old version of Midsummer Night's Dream, with Laurence Olivier, began to play on the TV. Within minutes she pulled herself up in front of the television set and stood rapt before it, watching until her chubby little legs gave out and she plopped down on her bottom. Who says Shakespeare isn't accessible!?)

After the performance the actors are always happy to spend time with the Ranchers, sign their programs, and chat about the play. This year's favorite was the Duke of Orsino, played by Emilio Banda. There were several juicy roles, for the most part very well done, but Banda exuded the charisma the Ranchers never fail to notice and appreciate.

There's only a week left, so hustle on out to grab a little culture in the boonies at Winedale.