With my recent postings on our trip to Florida with 11 residents to the National Down Syndrome Congress, some may be wondering about our enthusiasm for future conventions.  I can only reiterate that Disney World is a great place to vacation, but far from an ideal place to have a convention.  Last word on the subject.

The convention itself was excellent, as usual, and yes, we'll be back as often as we can manage.  But as to why it's so important, let me tell a story. 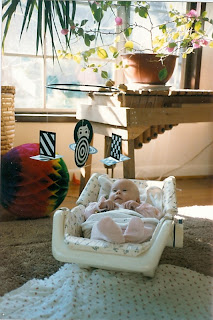 Kelly Page Horton was born September 18, 1984.  Like most parents with a new baby with Down syndrome, we were stunned, crushed, confused, and anxious.  Kelly was born with a condition called “leukemoid reaction.”  This was before the internet and our doctors mistook it for neonatal leukemia.  Then it began remissing; the blood started looking better.  The oncologist found a few articles that alluded to the fact that the condition might be temporary but concluded that if it remissed it would likely come back in a few years, between the ages of two and four.

After the bone marrow aspiration at two weeks, I holed up in the house with Kelly and refused, absolutely refused, to subject her to any more tests.  Then I learned that the 13th Annual Convention of the National Down Syndrome Congress would be held in San Antonio in October.  Daughter Martha, then 20, and I made plans to attend.

The day before we were to drive to San Antonio we received Kelly's karyotype, the picture of her chromosomes. Since she demonstrated all the major signs of Down syndrome, there was little question of whether or not she had it, but the karyotype contained a big surprise after all: instead of one extra 21st chromosome, Kelly had two!

All I could think was this: if one extra chromosome can cause all that damage, what would two be capable of?

Martha and I entrusted Kelly to big sister Janny, my mom Dorothy and Jerry's mom Estelle.  We headed south in search of the holy grail that would contain the answers to my many questions, not the least of which concerned my family's heartache.  As a prototypical “older” mother with a high chance of Downs, I thought I'd been prepared for this possibility, and to a degree I was.

But I was not prepared for all the rest that came with it–most everyone we knew acting like there'd been a death in the family instead of a birth, leukemia (albeit deferred), even my frustration with the baby refusing to even wake up for two straight weeks after birth.  If I'd only known what some families go through (heart surgery at five days, for example), would I have felt better?  I doubt it.  I'd been ready for the idea of Down syndrome, but hardly the reality.

Once at the conference we walked into a ballroom full of families with kids with Down sydrome of all ages–newborns, toddlers, school aged, all the way to older adults.  And they were doing all the things you do with kids–chasing them, talking to them, changing their diapers, playing peek-a-boo, separating siblings, correcting them, loving them.

“On my God,” I thought, “There is life after Down syndrome! And it looks pretty normal!”

The first speaker up was Dr. Jerome Lejeune, the French physician and researcher who co-discovered the extra 21st chromosome that causes Down syndrome in 1959.  I had great difficulty understanding his remarks, but none in recognizing the deep love and compassion this great man held for all children, everywhere, at any stage of development.  After the lecture I stood in line clutching Kelly's karyotype.

Dr. Lejeune took the proferred document and studied it intently.  He looked me in the eyes and smiled.  “How old is the child?” he asked.

“Then you are very worried indeed, I see, but there is no cause.  One extra, two extra makes no difference.  She will develop as most children with Down syndrome do.”

My relief was such you'd have thought  I'd been told Kelly would someday be awarded a merit scholarship to Stanford.  No difference!

Next on my agenda was the “Leukemia and Leukemoid Reaction” workshop, delivered by a physician associated with the City of Hope cancer and leukemia center in Duarte, CA.  I sat through the workshop and then approached him.

“I assure you that your baby's condition will continue to remiss, and she will have no greater chance of developing leukemia than any other child with Down syndrome over the course of her life, ” he said.  I hurried off to find Martha and share the good news, and then hustled off to find a phone to call Jerry and the grandmas.

For the rest of the convention we relaxed and got to know the families around us.  We went to all the workshops having to do with early intervention and learned a hundred ways to help our baby.

I understood for the first time in my life just how powerful and real the term encouragement is.  The “cour” part of the word means “heart,” and I literally felt as if my heart had gone missing and then been returned to me, stronger and full of hope for the journey ahead.

I understood that there is life with Down syndrome, not just after the diagnosis of it, and it's a good life after all.  I'd met the moms and dads and kids at all stages of development and from all walks of life.  I'd joined a pretty exclusive club I never sought admission to, but have come to cherish over the years.

So thank you, NDSC, for leading the way out of darkness almost 26 years ago, and for continuing to do so today.  This convention was no different.  It was filled with wisdom, love and hope for the future like all the rest.

And I got to attend it in the company of 11 young people, including my daughter, who have taught me more and given me more happiness than I ever thought my heart could hold.