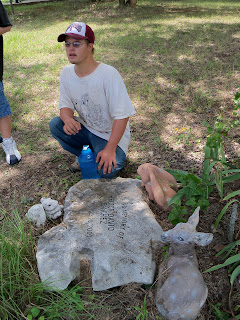 A new Program Director came in a few months ago, name of Phil.  Walking around the Ranch, Phil discovered an out-of-the-way garden, neglected and umkempt, much like the garden in the well known book The Secret Garden.

He asked me about it and I told him, shamefaced, the story of Sara's Garden–that it's a memorial garden planted by a father in tribute to his baby daughter.

Phil talked to Brian, our grower, about assigning the Garden Team to bring the garden back to life.  Together they worked out a plan, and at least a few days a week over the past several weeks have been working diligently under the oversight of Lori, the Garden Team Leader.

I was talking to Marci, our Lead Teacher, about the garden and soon realized nobody really knew the stories behind it, least of all the Ranchers who were restoring it, so this afternoon I went over to talk to Andrew, Sterling, and Matt about the work they were doing.

We settled down in the Gazebo, and I began with the story of baby Sara, after whom the garden is named.

It was early 1992, and a doctor who'd treated Kelly early in her life called us up to ask if we would mind his passing our name and number on to a family he was working with.  Their baby girl had Down syndrome, like our Kelly does, and she was in the process of developing leukemia.  At that point baby Sara's dad John was staying home to care for her in semi-isolation, since she was vulnerable to illness and infection because of her compromised immune system.

We happily agreed to connect with the family, and John confessed he'd like to come out one day a week just to work hard and discharge anxiety over his little one's precarious health.

Soon John was coming out every Friday and attacking the brush, mesquite, and old barbed wire fences that abounded on the Ranch's acreage.  He and Jerry felled trees (terrifying to witness!) and John planted many interesting things–variegated corn and acres of sweet potatoes among other things.  The latter were so abundant that one day Jerry stood looking them over and said, “John, what in God's name will we do with all these sweet potatoes?”

Out of that came the Yam Bake, but that's another story for another time.

Baby Sara, who was then approaching two years of age, continued to progress into leukemia and soon the time came to begin chemotherapy.  John and Mary Jane both had to stay much closer to Sara during these times.  No more charging around the Ranch for John.  Days became consumed by hospitals and doctors, fear and hope for their tiny girl.

Sara did well through all the chemo, bouncing back each time.  Until the last one.

We got the call that things were looking very bad.  The family was gathering at the hospital.  We were honored to be counted among them.  I divided my time between the chapel and the bedside where the parents stood watch in the pediatric ICU.

A priest had been called, and he anointed the Sara with oil in the sacrament of healing.  After some hours the watch ended, and two exhausted young parents returned home, bearing the weight of a loss no mom or dad should ever have to bear.

A few days after the funeral John showed back up at the Ranch again.  He began to clear an area–not too far, but not too near, either–from the little mobile home that served as we used to refer to, laughingly, as the Horton Home and the World Headquarters of Down Home Ranch. 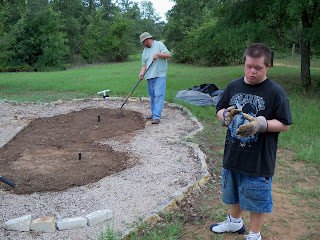 Day after day John ripped out saplings, trimmed branches, and dug flower beds like a man possessed.  He created a flower garden in the shape of a butterfly.  Friends turned out to help him and Mary Jane plant the garden and flower beds with a riot of native shrubs, flowers and plants. A St. Francis statue was set to watch over the garden, and angels hung from the trees.

A young oak was planted, and Sara's ashes interred where its roots would grow.  It was a beautiful day.

John, Mary Jane, and Sara's older sister Bonnie set about putting their lives back together.  In time Mary Jane was able to conceive another child, and Daniel was born.  The heartache remained, but happy memories and family life carried them into the future.