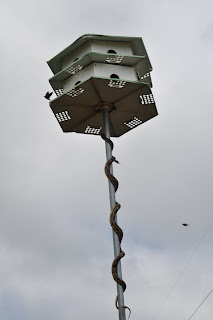 In March I warbled ecstatically about all the barn swallows deciding to make a home in…the barn, of course.  Don and Jennifer do not want barn swallows or any other birds in the barn, and they have a fierce plastic owl that will supposedly intimidate them and they place it menacingly facing outward at the end of the day, which I find hilarious.

Which, apparently, the swallows do also, because their numbers increased.

They're tucked away so far up in the rafters I have no idea how they fared against the snakes this year.

We had a little Carolina wren on our house porch this year, and we ardently watched over her and her three babies, but a snake got all four of them anyway. 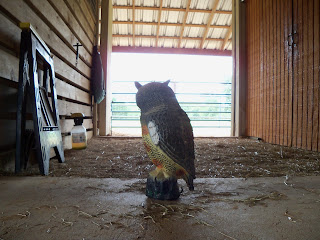 One five-foot long rat snake made it almost all the way up the martin house pole but Don and Jerry arrived just in time to send it packing.Of the four residence homes in the Village, I think only Martha House's nestlings survived to fly away.  Still, there's no lack of barn swallows.  When we drive over the 183 flyover at MoPac I look down and see masses of nests and birds who seem impervious to predation, except from the skies, which I'm sure also happens.

Mother Nature doesn't care.  All her children have to eat.

The adorable little bird, the slithery snake…we're programmed to say “Oh, how sweet” to the one and “Eek” to the other.

As for me, I'm not taking any stances.  I got my husband Jerry in part because, as he stood talking to my daughter Carolyn, then 12, she suddenly flashed a lanky arm into the garden and snatched out a colorful snake, proclaiming, “Look! A yellow-bellied racer!” 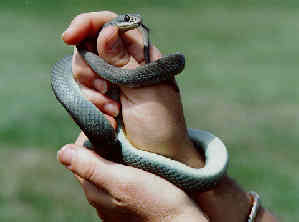 Jerry claims he thought: Any woman who can raise a kid like that is the woman for me!

I spend a fair amount of time advocating for the snakes of the Ranch and have saved many a one from the hoe.  I admire them, enjoy them, and run away from them when appropriate.

But I am sorry about those little birds.