Session 1 of Camp is over and I went to closing Saturday morning. I didn’t know as many of the camper families in this session—which was for teens and young adults—as I usually do. Most of the campers Miss Gay and I worked with the first 12 years of camp are now attending the adult camps. 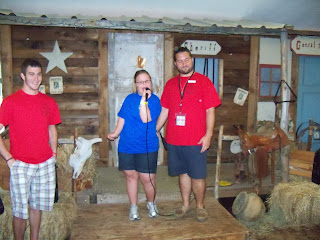 But it’s fun to meet the parents and hear the stories of what they did the previous week. It's not unusual to hear that  Ranch Camp marks the first time ever their child has stayed overnight away from the family. 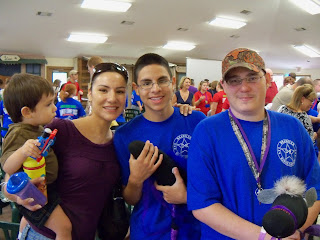 I remember when I took daughter Kelly to Camp Allen for the first time prior to her attending with all her buddies from our little church in Taylor. I wanted her to see where she would stay, show her where she’d eat, swim, do crafts—anything to help ensure a success for her first big adventure. She was eight that summer, but physically and functionally more on the level of a five-year-old, so there was reason for concern!

As we approached the commons area of the camp area her group would use Kelly scampered ahead of me and was halfway up the stairs before I could call out to her, “Hold on a minute, baby girl!”

At which she stopped in her tracks, whipped around, glared at me, hand on hip, and said firmly, “Not a baby! Just a girl!”

Properly chastised, I allowed her to explore her new surroundings without interference from me.

A week later, Jerry loaded the car with all the requisite items for a week away from Mom and Dad and headed back to Camp Allen. Kelly’s cabin was nestled high in the tall pines, up a flight of open wood stairs, which she took two at a time to the top and quickly laid claim to her bunk.

As I helped Kelly make up her bed and stow away her gear, Jerry cased the area for a place to hide out and spy throughout the coming week (his new plan, or so he claimed.) By this time I was comfortable that our girl would do fine at camp, but he had yet to be convinced.

Kelly, however, sat on her bunk with her little legs dangling down and brushed her hand toward us. “Go now,” she said firmly, pointing toward the door.

We imposed kisses on her freckled little cheeks, and instructions upon the counselors, and dragged things out as long as we could before heading for the car.

I had looked forward to my week off from mom duties, but instead found myself disoriented and missing my little sprite something awful. Jerry felt the same. We morosely ate supper and wondered aloud how things were going.

The following Saturday we were up at dawn and at Camp Allen before the campers had even finished breakfast. Kelly was mildly interested in us, but much more so in her friends and counselors. She sang the camp songs with gusto and fervently hugged “Mother Lacy,” the Episcopal priest who served as chaplain for that session, before consenting to get in the car and come home.

Once home she fell quickly back into her routine, but we saw big changes in our girl. She had lived life for a whole week without Mom and Dad overseeing every aspect of it. She’d made friends and scared the lifeguards by jumping right into the deepest part of the pool before they’d had a chance to assess her swim skills.

She’d let her counselor comb out her long hair without protest, done her crafts as best she could, and handled her grooming about as well as the other girls in her cabin seemed to have done.

It was her first glimpse of the possibilities of life outside the home, and she loved it.

At Ranch Camp closing on Saturday, I overheard campers telling their parents, “I want to come back again next week, Mom.  I don't want to go home!” 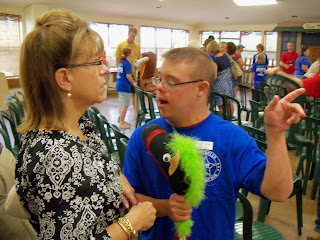 Charlie informed me that he planned to graduate next June, and then would be here to live full time.  I took Charlie and his mom and dad on a short tour of the Village.  Alan showed them around the interior of Barnabas House.
This is the sad part of Ranch Camp.  So many want to live at the Ranch, but so few ever will.
But it's something to think about.