Berry season is upon us!

Jerry and I picked blackberries Monday evening and I came home and gobbled mine up right away with sugar and cream. Last night (Thursday) he banged around in the kitchen for about 3 hours with 12 open cookbooks making a pie. After all his labor he declared it unfit to eat, but we don’t know yet because we haven’t tried it. (Recipes for pie are welcome. We’re good with cobblers, but not so much with pie.)

His birthday is Monday so I’ll make a pie of some sort. 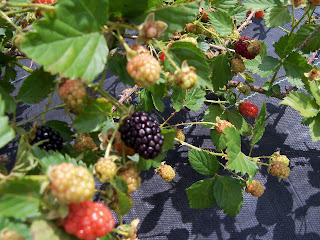 Today there were zillions ready to be picked, so I went out to check on the Garden Team, consisting of Crystal, Michael, Matt, Andrew, and Sterling.

Truth to tell, picking blackberries is not their favorite thing to do. It’s hot and sticky—in more ways than one!

But they’re troopers at heart, and Brian, the Ranch Grower, has thoughtfully set up shade tents for when the sun is really beating down. And anyway, it’s lots more rewarding than last year during the drought, when the berries were few and far between.  This year we can get four times the berries in the same amount of time as last.

Mostly we’ll make jelly out of it to sell. There are also wild plums and mustang grapes we can harvest, though we have a hard time beating the forest critters to those. But yum! Is that stuff good. We’ve tried to make jelly from cactus pears, but only succeeded in making syrup, which didn’t have much taste beyond the sugar in it but did almost glow in the dark.

We get to keep a lot of the jelly. Sometime the batch comes up short and you only get ¾ of a jar, or something like that. Or they don’t set and we use them for syrup (really really good.) 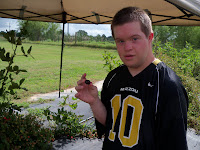 We think about what a special time it must have been for the Indians when the berries ripened and the honey was ready. Those were probably the only sweet things they got to eat all year long.

And they’re still just about the best.