Friday I attended a reception given by the Chaparral Women’s Club of Round Rock to award grants to a number of local non-profits.

It was fun meeting the other grantees, and I had one of those moments so satisfying and wonderful they go beyond any emotion you can pin a name on.

At my table, a woman spied my name tag and said, “Oh, you’re from Down Home Ranch! I have to tell you that at the regional Special Olympics games, some friends and I began noticing this one team. There was just something so special about them in the way they treated and supported one another. It was very touching, and I had to find out who they were, and they were from your facility.” 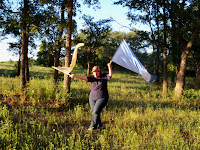 Wow. Every hope and every dream we ever had culminated in that one statement. Why? Because that’s exactly what we have been aiming for all along.

When Kelly was born we asked ourselves where the beloved community would come from that we prayed she would belong to as an adult. We checked out various living situations, and we really just didn’t find it at all except in a very few extraordinary places, and we’ve worked very, very hard over the past 19 years trying to turn Down Home Ranch into it.

I’m far from naïve. The beloved community can, and often does, drive us nuts with frustration. The beauty of it reveals itself shyly, fleetingly—floating by on gossamer wings. 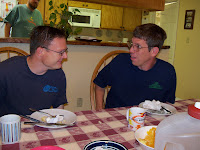 More often, we are plagued and puzzled by its absence, by our inability to get it right. We do live in reality as created by members of the human species.

Seeing Rebekah welcoming the dawn with prayer flags as praise music boomed out of the living room.

Getting together with fellow staff ladies together last Friday evening for a potluck and a chance to share a little of our non-duty lives with one another. Nothing profound—sing a little, eat a lot, pray some, and end the evening watching a DVD of a female comic who had us howling with laughter.

And the day after the cruise last year, the president of the Elgin Chamber of Commerce called up to say a man had contacted their office wanting to know “who those fantastic people were on the cruise.” He’d been so impressed with our Ranchers, how they treated one another and other people, and with our staff—how they treated the Ranchers.

I first found it at St. George’s Episcopal Church in Austin. There was a reason that Kelly and St. George’s came into our lives at the same time: We had to experience it before we could ever hope to help it come about.

And that is the very foundation of it.