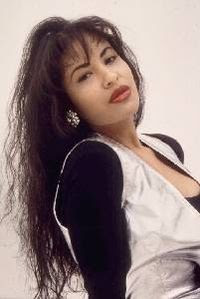 In March I chanced to read an article in the Texas Monthly commemorating the 15th anniversary of  the death of Mexican-American singer Selena.  I did remember when she was killed, but had seen her at the time as a minor pop singer in whom mostly young people would be interested.

Needless to say, the article was heartbreaking, but more than that, it piqued my interest anew.

A few days later I took Sterling and Kelly to Wal-Mart, and chanced to pass by the rack featuring Spanish music.  There was a double album of Selena's hits and it wasn't expensive, so I bought it.

Wow!  I fell in love on the first song.  What a voice! What presence! What sureness! What musicianship!  I was hooked.  Soon Selena was booming on my car speakers wherever I went, and the joy of listening to her irrepresible renditions filled my days.

Kelly and Sterling liked it, too.  I told them about Selena and reminded them we had a movie about her in the library, but warned that it ended very sadly.

Kelly watched the movie that night, and asked me lots of questions the next day.  We've played the songs and talked a lot more about things I imagine a lot of people would really like to know: Why did that woman shoot Selena?  Is Selena in heaven now?  How old would she be now?  Is her husband still sad?

Then about two weeks ago I came out of my office and what do I hear but “…'Amor prohibido murmuran por las calles'…”  Selena!

“Who's playing Selena?” I ask.

Now all the Ranchers can talk about is Selena.  DVD sales are booming, Ranchers are clamoring for me to teach them her songs in Spanish.  We sing, we dance, we boogie to Selena.

Often the Ranchers want to talk about the unbelievable tragedy of her death and our hearts break anew.  How is it even possible that so much aliveness could be taken away?

But I remind them that the light shines in the darkness, and the darkness will never overcome it.

And we best honor Selena by holding onto that, and by joyfully letting the gifts she left behind fill our lives.

Photo:  Selena, pictured in April 1994, for her Amor Prohibido Tour