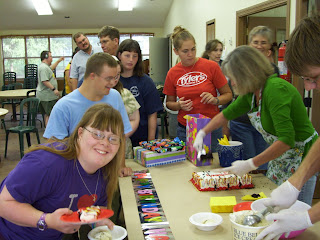 Kelly's 25th birthday party in the Pavilion with all her buddies.

On a recent trip to Kansas, at about mile #569 a voice chirps from the back seat:

She was talking of course, about the extra 21st chromosome that causes Down Syndrome. Our talks about her disability had advanced into genetics (though I must admit my level of understanding is about on a par with hers.)

It’s been a long journey.

As a very young child Kelly blended in seamlessly with the other kids at her Montessori school.

Later on, in public school, that innocent time was lost. Some classmates were kind, most indifferent, and some problematic.

Kelly handled the schoolwork itself well up until fourth grade, when the curriculum became more abstract and she began to fall behind.

Then one day her social studies teacher, wanting to pass on some good news in a year when it was becoming scarce, told me a story about what happened in the classroom that day.

The students had formed two lines for a history bee. The subject was life in Texas during the 1800s, and the question that fell to Kelly was “What did the cowboys take to Kansas on the Chisholm Trail?”

When the teacher read the question, she said that Kelly’s team began to moan and groan, thinking she wouldn’t know the answer and they would lose the bee. But Kelly hung her head and whispered shyly “heifers.”

Most of the kids on her team were upset, thinking she’d got it wrong. But a few ranchers’ kids started saying, “Kelly got it right! A heifer’s a cow. Cows are what they took. We win!” The teacher agreed.

A triumph, yes, but bittersweet at best, and the story itself enough to convince Jerry and me it was time to get Kelly into an educational setting where she could enjoy more success than failure. The next year we moved her into the Life Skills classroom at the middle school.

It was a good placement, and she did well there. And confronted with a wide array of disabilities in her new classmates, Kelly became more aware of her own.

We’d never hidden the fact that she had a disability, and its name was Down syndrome, but she’d never been that interested. Then one day she got out her Where's Chimpy book and stared at the pictures of the little girl who searched for her stuffed chimpanzee.

“She has Down syndrome, too,” I said.

So on and off we talked about it, and its causes, and that pesky extra chromosome, and although once during high school she declared hotly, “I don’t LIKE Down syndrome!” these days she seems pretty much at peace with it.

Maybe that’s because now most of her good buddies at the Ranch and off have it, too.

At Down Home Ranch we’re routinely accused of not “getting it” when it comes to our effort to build a community in which our daughter can enjoy a good life among friends with similar interests and abilities. The academics and agency people feel people with Down syndrome and other intellectual disabilities should live independent lives in the city.

Well, we checked out living options for adults with disabilities when Kelly was a toddler. We didn’t like what we saw. The people seemed lonely, often living with people they disliked or found threatening, having limited opportunities to go places and do things.

We wondered, “Where will Kelly’s circle of friends come from? Who will invite Kelly out for pizza and a movie?”

Friends of kids with Downs in high school reported they got lots of high fives in the hallway, but no invitations or offers of friendship, unless they were part of some organized (and always short-lived) project. After high school, most kids wound up sitting around the house with nothing to do, with a “tagalong life.”

You know, tagging along when others went about their errands or social life.  “Hey, Kelly.  I'm going to the library.  Want to come along?”

We thought our daughter deserved her own life, with the chance to make real choices, and earn money, and interact daily with a group large enough that she could pick her own friends.

That’s why we founded the Ranch, and it works.  If it stops working for Kelly or other Ranchers, we'll help them find a different model, but for most, right now they are able to enjoy their young adulthood like other young adults–learning to work, get along with peers, and have a rich social life.